About Tomb Raider demo: I tried the 3dfx under Windows 95 and PCem closes right after DOS4GW. I even disabled sound in setup, still doesn´t work
I also downloaded Tomb Raider regular demo, and works fine! So, must be a Voodoo issue
Top

i was fiddling with tomb rider and found strange thing, the full version ,it run well on v12 with 3dfx patch, then i run the normal version using virge dx, and screen crashes, game still working in the background but screen is as on provided picture. any way i can use win key and close the game, try run again and it do the same. then restart and run the standard full version and it works fine first time, then close and run 3dfx , it runs ok. then close 3dfx and start normal version and screen crashes again , untill i restart or maybe run different app, didnt try. looks as if always after running 3dfx version the normal ver. does crash. and when i close the 3dfx ver. on windows , without using game menu and start normal version , screen crashes as well but i could see 3dfx game frame. maybe something with buffer? i thought it might help. any way when i run normal ver first it works fine, its not a problem at all. i run it on win98 and both 3dfx and normal are working, just the strange screen problem with normal version after running voodoo ver. did'nt try the demo. dont have demo.

Interesting, not seen anything try to read that register before. Can you link to the exact demo that you're using?
Top

I downloaded it from around ten sites for hash comparison of zip contents, just to make sure it's the same through all of them.
It is.
Top

A. Naim wrote:Interstate '76 Nitro - Clicked on "3Dfx" on the startup screen, and immediate Crash to Desktop.

What info do you need, and how would I get it?

Update: Installed and drove around a bit with 3Dfx, 640x480 only. No problems detected.
Top PS: Not only me have problems with dropping FPS in Colin McRae Rally?
Last edited by Ryszard on Mon 27 Feb, 2017 9:20 am, edited 2 times in total.
Top

I've played a few games not yet tested I believe, and all work flawlessly:

Rayman 2: The Great Escape (no sound though)
Top

is working flawlessly
as far as I can tell only issue is my weak hardware lol. Since I was only getting about 75-80% speed. Did not seem to respond to changing the the settings in the game. I suppose I should have expected that last bit since that does not change the hardware I am trying to emulate.
Top

I think this can be updated - map is now rendered perfectly fine. Also, Sports Car GT works fine, no compatibility problems at all, apart from Voodoo 2 not being enough for this game

Actually I think the main list is very out of date. I'll refresh it when I come to do testing for v13.
Top

SarahWalker wrote:Actually I think the main list is very out of date. I'll refresh it when I come to do testing for v13.

Indeed. It would be cool to have some kind of database where you can find a specific title and there you find if the game:
- Hasn't been tested yet
- Works with some bugs.
- Bugs non related to PCem
- Works flawlessly

True - but just for my curiosity: for all or only W9x 3DFX games? Unlike PS2 emulators (I guess because I never used any), PCem emulates plenty of platforms with different configurations, not mentioning whole guest OS with drivers installed. That's plenty of data per title and possible false negatives because of that - at the other hand - peer review should handle this

With various driver versions and regressions 3dfx themselves did among their Voodoo Graphics and Voodoo2 cards, it wouldn't be as elegant as PCSX2's compat list (or any console emulator's list) that's for sure.

There's also bugs with the cards that shouldn't be known as a bug with PCem. Voodoo2 breaking on textures in Max Payne (as well as general clamped-to-256-size blurriness), and the various modulation/buffer regressions from their DX7 beta driver onward for example are not PCem bugs. It would require moderated cross-verification with actual voodoo rigs to debunk compatibility reports for actual behavior

The only notable bugs/inaccuracies that stick out off the top of my head at this moment are:
- Battlezone 2 not initializing on V2
- Jane's F-15 breaking
- GunMetal crashing hard
- Mip LOD calcs not being radial
- Mip LODs where there shouldn't be (skies, 2d elements, etc)
- Blending dither table on V2 not double-sized in Glide
- No dithered mipmap modes on V2 (optional fake trilinear intended for multitextured stuff)
- Gamma correction method is wrong (kinda my fault as i've submitted the usual formula (as seen on V3), V1/V2 does something different that loses darker colors and ends up overflowing leading to color corruption if set too high. Probably some sort of clamping bias that increases with the clut)
Top

Not a game, but if you need to relax abit, Voodoolights screensaver works under Windows95.
Top

King's Quest: Mask of Eternity loads and looks really good, but it runs dreadfully slow even with minimal graphics settings, 640x480 and shadows and dynamic lighting turned off. Amazingly, I'm getting 100% performance on Mobile Pentium MMX 300, but again very slow.

What Voodoo card are you using? Dumb question, but... did you configure the game to run under Glide or D3D? That's what makes the speed difference
Top

What Voodoo card are you using? Dumb question, but... did you configure the game to run under Glide or D3D? That's what makes the speed difference

I tried both Voodoo 1 and Voodoo 2. The game defaulted to 3Dfx. I even tried it with both Windows 95 and Windows 98 SE. Nothing ever made any difference.
Top

Jane's WWII Fighters will take the emulator down with it in 3dfx Glide on Voodoo2.

Hello Sarah, in PCem v12 that Tom Raider 3Dfx Demo crashes ... therefore I think, the problem is still (or again ?) unsolved. Or anyone out there, where the that demo runs well on PCem v12 ?

Hello Sarah, in PCem v12 that Tom Raider 3Dfx Demo crashes ... therefore I think, the problem is still (or again ?) unsolved. Or anyone out there, where the that demo runs well on PCem v12 ? 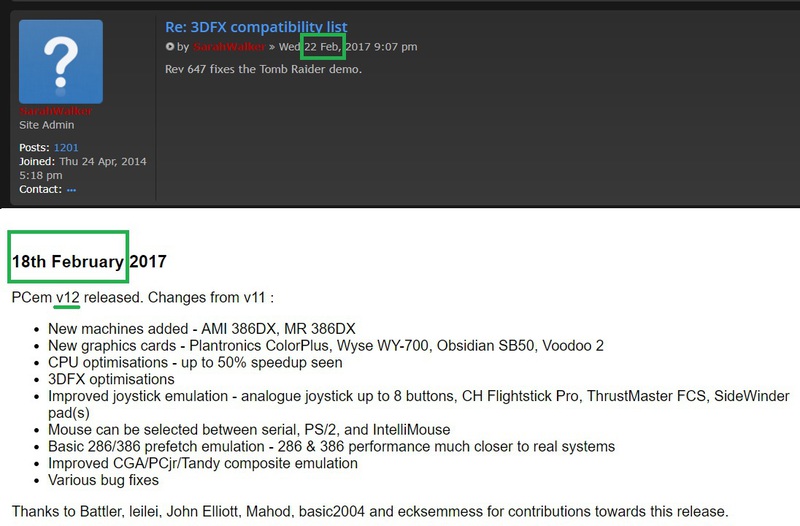 Thank you for the info. Nice to see the constant progress in development of PCem ... keep on the good work !

I tried Need for Speed High Stakes and Porsche Unleashed/2000 with PCem v12 set to emulate a Pentium MMX 200 and a Voodoo2, both seem to render correctly, although the latter is rather slow (which is to be expected I think). I also tried running MiG-29 Fulcrum, but a large part of the scene is dark. I tried turning the emulated processor down to a Pentium MMX 166 to no effect (other than less sound stutter). It showed the 3dfx logo animation when it starts, so I believe it is running using Glide. Below is a screenshot of the issue. And, I tried 3DMark99 MAX and 3DMark2000, no glitches that I can see. I'm running PCem (which has Win98SE running) on a laptop with a Core i7-6700HQ and Windows 10 version 1703.

Return Fire II in Glide will cause PCem to crash when selecting a vehicle in-game. Nothing in the log, just an emulator crash. Voodoo2