by SarahWalker
Thought it was probably worth keeping a track of the state of 3DFX emulation. Anyone who's tested games not on this list, please post with their status and I'll update the list.

by SA1988
Donald Duck Goin' Quackers (NTSC/PAL) -> with 3dfx, just black screens (not driver-related, since I've tried every 3dfx Voodoo1 driver for Windows 9x) once it proceeds examining the resolutions, so, not working at all.

by SarahWalker
Sorry, can you also say what revision was used?

TomWalker wrote:Sorry, can you also say what revision was used?

by leilei
Build is -march=i686, dynarec with profile generation/use. no other switches. PMMX166 tested. Revision 260.

MILD PROBLEMS:
Descent II looks good and works, however there is a heavy slowdown when you select another weapon/missile
NOT 3DFX BUG - Battlezone has polygon clipping issues and strange texture picking issues, like this rocket trail getting a red thrust texture at the end of the smoke trail for example
Mechwarrior 3 has a blank polygon showing up at explosions, possibly an issue with its pixel particle system
Driver's Education '98 has HUD element corruption (obscuring triangles). Same engine tech as Tribes (Darkstar) despite being much earlier.
Starfleet Command has some background texture issues (i.e. white angled polygons, possibly texture thrashing with the nebula)

MAJOR PROBLEMS/HANGS:
Battlezone II fails at menu, gives black screen, doesn't play movie.
Outlaws is dark as it cannot fade from black. Also, texture coordinates are corrupted
Myth the Fallen Lords (Demo) looks good but seems to hang after a while?
Starsiege Tribes hangs and has artifacts with its 2d gui elements (obscuring triangles).
Freespace 2 has texel alignment issues with text and hangs.
FIXED IN 330 - Half-Life is flipped and really screwed up
Star Wars Episode I crashes the emulator and also messes up the cutscene scripts somehow

by Orchidsworn
I thought voodoo 1 was only a DX3 card Voodoo2 got up to DX5 since 4 was more or less skipped. I don't think 3DFX survived long enough to get to 8 but by that point I would recommend a virtualization solution and windows XP. Do you have an example of some DX8 games that don't work in a Virtual Machine? I would be interested in such a list.

by leilei
Such a list doesn't apply here. The games I am testing are strictly Voodoo-era where they're at least expected to work in some form (being the most ubiquitous 3d chipset then). It would be stupid if I reported "wah ut2003 dont work in pcem fix it tom its important do it now" and yes Windows 98 Second Edition is definitely being used and none of the testing is fake.


Also being a "DX3" card doesn't mean it wouldn't work with some newer DirectX APIs. You could run a PowerVR PCX2 with some DirectX 7 games and that hasn't had a driver update since May 1998, just before DirectX 6's release and this is a card far less capable than the Voodoo Graphics

by leilei
Not much change for 334 except for Half-Life being fixed. Also it turns out Battlezone's bugs are also evident with playing it on the ViRGE DX so it may be another CPU bug there probably, so striking that out

by SarahWalker
Rev 343 should fix SA1988's Donald Duck game. I did notice the odd visual error though.

by leilei
Serious Sam The First Encounter 1.00 works if you install WickedGL, despite the whole Voodoo2 requirement.

by kazblox
Metal Gear Solid PC has been tested to work in PCem, despite the fps being really slow due to sacrificing frames for full-speed emulation of the Voodoo.

Edit: I think this was on a debug compile anyways

by Maraakate
Q2DOS with 3DFX rendering works OK in pcem for those interested.

by A. Naim
Interstate '76 Nitro - Clicked on "3Dfx" on the startup screen, and immediate Crash to Desktop.

What info do you need, and how would I get it?

by candle_86
starfleet Acadamey is working

by laxdragon
A few games I tested that work with no issues other than some slight slowdown occasionally. 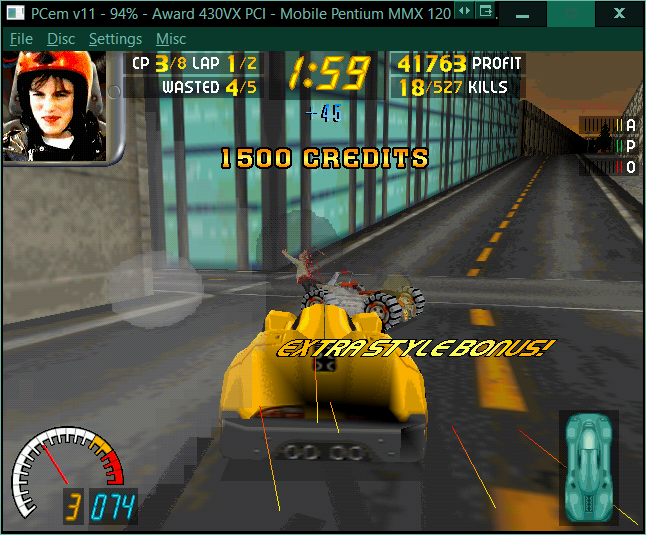 And they worked without a single issue. Sometime performance may be far from good, but most important, its making games work and look like on real VooDoo card. Without artifacts.

by szadycbr
I did run nfs Porshe 2000 on v11 with voodoo1 , only requirement is to install diamond monster driver with vxd ver.1.4, P166mmx on low with high wiev distance run it wery smooth, as of newest source build with voodoo2 no need for messing with drivers, work even faster. Also Return to Castle Wolfenstain , works no problemss on voodoo1 but you need at least emulate 300mmx to get resonable speed, with emulated p100 it is 3-5 sometims 10-15 fps, but hey, still amazing cos the game requires PIII 500.
3d mark 2000 at demo works nice on p200mmx.
In general, i think that everything will run as on real hardware, i know people had some problems, i did install tons of software and have none. i could go on and on with what works.

by omarsis81
Altough I seen Expendable as a working title, I can't get it to run on the official version 11. With and without Voodoo recompiler enabled. It crashed after the intro movie. It may have been fixed on later revisions though...

by SarahWalker
Works okay for me. What's your emulator configuration, and what Voodoo driver are you using?

SarahWalker wrote:Works okay for me. What's your emulator configuration, and what Voodoo driver are you using?

430VX / Pentium MMX 233 / 128 RAM / Windows 98 SE / Latest reference Driver from 3Dfx dated May 1, 1999. What driver do you recommend?
I tried running the demo version and the retail one of Expendable and none work. I may try reinstalling Windows...

by SarahWalker
When you say it 'crashed', what exactly do you mean? If it's giving an error, can you provide a screenshot?

SarahWalker wrote:When you say it 'crashed', what exactly do you mean? If it's giving an error, can you provide a screenshot?

It works fine now. I figured I wasn't having any sound in the intro movie, so I checked the hardware installed and I had a yellow exclamation mark on the SB16. I reinstalled the driver and works fine now. Sorry for bothering

by SarahWalker
Rev 624 should fix the HUD flickering.

by UPerschke
Tomb Raider 3DFX demo (tomb3dem.zip) crashes PCem V12 right after DOS/4GW + blank screen.
Can't test with full version since I don't have it. Happens with both Voodoo interpreter and recompiler.

I have searched related for a while now here and elsewhere, found nothing useful.

Fiddled around with Voodoo parameters but no impact.

Am I missing something?